December 10, 2013 would have been Spirit's 12th birthday. On May 28, 2013 I helped him across the Rainbow Bridge. A very sad day and still brings tears to think about it. Spirit was my heart dog. While I love all my huskies, every now and then, one grabs you more than the others. Before Spirit, it was Quinn. When Quinn passed I wasn't even going to get another Siberian. I had my pound dog Annie and figured that was enough for a while. But, Annie was lonely, so I got Chena. And a couple years later, I got Spirit. Maybe I bonded with Quinn and Spirit because they came into my life when they were only a few weeks old. I met Spirit when he was 10 days old.

Spirit settled in quickly. Chena adopted him immediately. Annie tolerated him. My mom's dog Jill loved him. He was quite the boy. He seemed to like everyone.

Spirit was a great dog. We walked everyday at Prettyboy Reservoir. He was allowed off leash for a couple years, until one day Chena led him astray. After that, only one of them was ever off leash at a time. That pack mentality was not good. He loved running through the woods. He chased deer--never caught one. He met horses and was quite interested in them. He caught a squirrel once and brought it to me. I ignored him. I knew if I tried to take it away he'd eat it. He was so proud of himself and I think disappointed I didn't feel the same. So he hid the squirrel under a fallen tree. For 3 days he'd stop and check on that squirrel. But the 4th day, it was gone. He was quite upset about that, running to me like it was my fault.
Spirit proved to be a real snow dog. Whenever we had snow--and this was in Maryland--he would be laying in it. When we moved to the Poconos he did the same thing. And when we got to Alaska I think he found his heaven.

In the Poconos, we lost Chena. And even though Sissy had come to live with us, Spirit really missed Chena. After that, he never really hung out with any of the girl dogs. I was the only one he wanted to be with. I kept getting more dogs and while he liked them, he became Mr Aloof.


While he loved to run, he didn't pull a lot.
Finally figured it might be because his head was so big and
heavy that he wasn't comfortable. When he could no longer keep
up with the girls he retired. When he was younger, I did show him a
few times, but he wasn't much interested in it. We tried obedience, but

unlike Chena, he would never get a CD title. He did however love agility and was the class clown, talking through every run. He was pretty good at it, except for the weave poles. I think in that husky head of his, he thought they were pointless.

Spirit became my go to dog. Whenever I could only take one dog, it was Spirit. He was so mellow and so handsome and he loved to go. He rode in the back with his head between the seats, many times laying his head in the crook of my arm. He was the happiest when it was just he and I out and about. I took him when I drove back the Denali Rd, when we camped in Ninilchik and when I worked at the Princess Lodge for Alaska State Parks one summer, he went with me. He was part of my demonstration on mushing and sled dogs. He loved it for a few weeks, but the pressure got to him. We would be in the lobby with 40 people standing around him taking his photo and calling his name. I think he couldn't understand what they wanted since he was right in front of them. I was sad to send him home, but knew he would be happier--or at least not stressed out. He did mope when I went away and didn't take him. He did love going to Ninilchik. We camped in my Scamp on the beach. He got to sleep in the bed with me and we walked a lot..his favorite thing. Spirit was also a thief. If you had food on the counter, you better not step away because he would have it. I never put food on they table unless I was going to sit down. At Ninilchik, sitting around the campfire with my friends Pat and Sarah, Pat had a sandwich in her hand and was holding it up near the side of her face. Spirit walked up behind her and took it right out of her hand. He was so fast!! Pat was quite shocked. LOL He was also quite the beggar. If you ate dinner he was right there at your elbow with the most expressive eyebrows just looking at you with that, "Are you going to eat that?" look. It was hard to get mad at him. Even at night, when he choose to sleep outside. Didn't matter the temperature, he was happiest outside. That is, until about 4 am when he would beat on the sliding door and scream like something was after him. I'd let him in and he'd run full blast to the bedroom, jump on the bed, turn around really fast and collapse with a harrumph. He was great to sleep next to at -30 as he radiated heat.


(All photos are ©2013HuskyProductions/DonnaQuante)
Posted by djqhusky at 11:01 PM No comments:

My 7 Year Alaska Vacation is Over


I have enjoyed living in Willow, Alaska more than I can explain to you. I moved here to run my recreational team of sled dogs and have experienced great happiness out on the well groomed trails of Willow.

But, now it is time to move on. So, for the person, couple or family looking for a nice Alaskan style home, on the grid, 5 star energy rated, 1.32 acres of land, dog lot in place, fabulous greenhouse and more--just look at the photos. Home has three bedrooms, one of which is the master bedroom consisting of two rooms. There is a room in the full basement which I use for a guest room, but it has no windows, so cannot be listed as a bedroom. It is quite cozy.Two bathrooms, one on the main floor with the master bedroom and one upstairs with two bedrooms.

The two garage is heated with a Toyo stove and has it's own oil tank. You'll be thankful for the heat in winter. The garage also has a new roof. Inside there is a lot of extra room with a work bench, bathroom, dog run-with a dog door to the outside puppy pen and wood shed, and enough space to store an ATV.

I know I haven't written in a long time. Sometimes life gets crazy and there just isn't enough time. I will write soon and tell you what I've been doing. But I did want to share this. I've been taking photographs for a long time and wondering what to do with all of them. I finally found a place that makes quality prints that can be made any way someone would like--from framed photos to cards. This link will take you to some photos I took last week in Nevada on a side trip to Red Rock Canyon. A beautiful, stunning drive through the valley. Hope you like the photos.
red rock canyon prints
Posted by djqhusky at 3:26 PM No comments:

After the Ninilchik trip (see previous entry listed right) it was back to work at the campground. Life slowed down as the Silver run was OK this year, but not spectacular. My camp hosts and I went back to the Deshka River with I Fish Alaska and fished for Silver Salmon. We each caught our three a day limit and had a great time again. It's worth it just to be out on the beautiful river. Life at the campground was nice. We finished painting all the picnic tables and the camp hosts had the grounds clean of all trash. It's hard to realize that some people have no respect for the earth and continue to just dump their trash. Where's our Crying Native when we need him??
At any rate, it was a lovely end to summer and closing of the campground.
I made a quick trip back east to visit my 85 year old Mom, see my family and some friends and work for a few days on a sitcom called, "Are We There Yet?" Nice people, cute show. While I love the beauty of the countryside back east, it is far too crowded for my taste and I was glad to return to Alaska.
Autumn was in full swing when I got back. The shades of yellow are just lovely in the fading sunshine. I've been running my four dog team and they are doing great! Temperatures drop into the 20's at night and rise into the 40's during the day. It's a great time of year.
The Willow Dog Mushers, of which I am currently President, held their 4th K9 Athlete Symposium. It was a huge success and a lot of fun. So much to see and do. Here's a blog with photos of the day:K9 Athlete Symposium
A day trip yesterday with fellow Parks employees was the perfect way to end September. We drove north on the Parks Highway to the Veteran's Memorial. Stopping at the Princess Lodge first  for a photo op with the Mountain made me realize how much I love it up here. We decided to continue north to Cantwell where we had lunch at the lodge there. A little known place as it is back off the highway. Food was very good. We were surprised to see snow along the road way. It must have fallen overnight. Termination dust was evident everywhere. Broad Pass was it's usual spectacular self. It was a day of laughs and friendship and just being.
Today was a clean up the yard day with help from a friends' son. He's a good kid and a good worker. After I took him home, I stopped for one last fall photo from Hatcher Pass Rd.
Enough talk, pictures tell a better story. Enjoy! 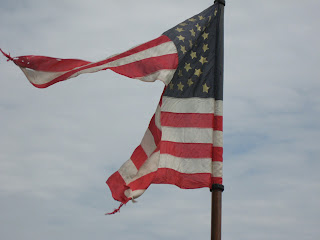 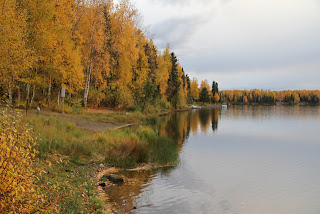 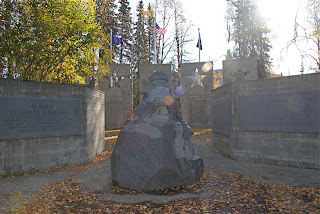 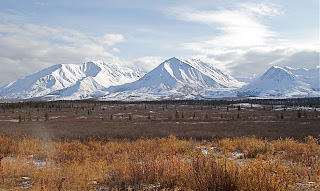 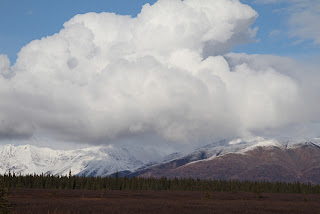 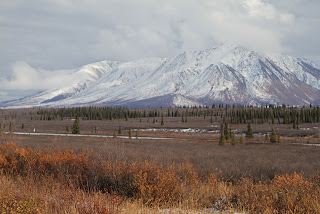 Husky Productions on the web